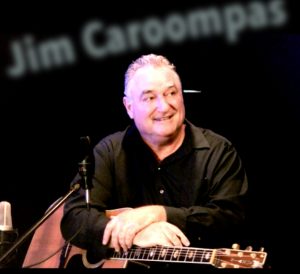 Our first episode for season 3, hosted by James Marshall Berry will be the legendary Jim Caroompas. Jim has an incredible pedigree and fervid performance style, that’s all I can really say (watch the show).

“Live From KSVY” Studio B is a TV series created to spotlight the incredibly talented musicians of Sonoma County. A personal look at the artistry and passions of our local musicians. We often shoot these episodes in Studio B at our 680 W Napa st. location, thus the name “Live From KSVY”. The shows are not scripted but rather shot as a live performance, not actually live on TV.

Recently we realized it had been a year since we filmed a new episode. Quickly we pulled together a few resources and captured some fine tracks. Timing is everything and the right things fell into place. One being an opening for us to use The Theater School where we filmed the new batch of videos. Time of course is always our biggest hurdle. We managed, barely.

Coming up later in this summer will be the sophomore appearance of the glowingly astute Jeff Falconer with Jdub and Dino. I broke the thesaurus looking for enough adjectives to describe those two…Also appearing will be DayLater featuring Will Cotter and James Ambrose.

Previous episodes from LFK can be viewed on SonomaTV (Check the Schedule) or direct from our website on the LFK Page.

You can also see most everything we filmed on our Youtube channel.
If you can’t find it. Email us